Power of Indian Passport and Ranking 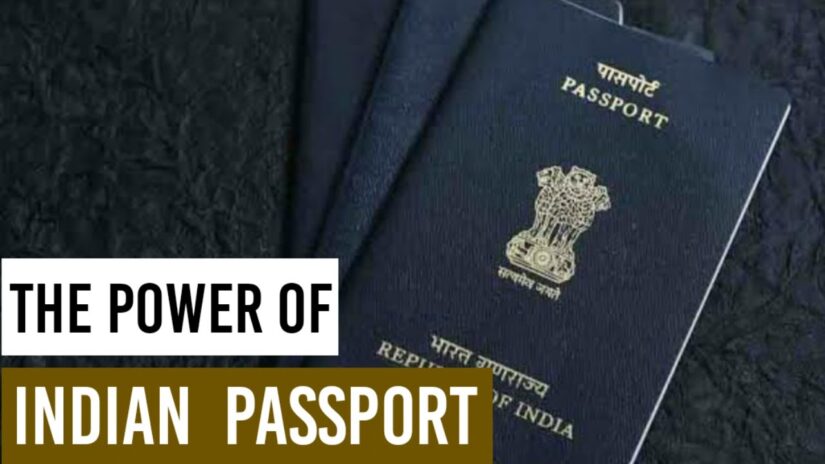 Every country issues passport to its citizens as a permission to travel to other countries. With the passport, citizens can travel abroad for various reasons such as vacation, study, business trips, medical treatment, family visits and pilgrimage.

India also issues passports to its citizens as right to travel to other countries. This is issued by the Indian Ministry of External Affairs. It serves as a proof of Indian Citizenship as per the “Passports Act 1967”. According to Wikipedia, The Passport Seva (Passport Service) unit of the Consular, Passport & Visa (CPV) Division of the Ministry of External Affairs functions as the central passport organisation, and is responsible for issuing Indian passports on demand to all eligible Indian citizens. Indian passports are issued at 93 passport offices located across India and at 197 Indian diplomatic missions abroad.

There are 3 types of Indian passports issue by “Government of India”. These are issued for different purposes for different type of Citizens.

This passport is issue to Ordinary citizens of our country. It can be used for ordinary travels such as Medical treatment, Family visits, Pilgrimage, Vacation, Education and Business. This is present in Dark Blue cover. Ordinary citizens can apply for it for their personal use. It is called “Type P”passport, acronym for Personal

This passport is issued to the people who represent Indian government on Official business. Naturally, all the government officials who are currently in power will get Official passport. This is present in White cover. White passport is issued to all non gazetted officials of MEA and upto the rank of Joint Secretary of any Ministry of Govt of India, while travelling abroad on official work, including temporary duty.It is called “Type S”passport, acronym for Service. This passport will be retained by the govt after the use. It does have some advantages like No-immigration check, extended visa period and special treatment at embassies. This is the most powerful passport in India compared to other two.

This is issued to the people who are Indian diplomats, Members of Parliament, members of Union council of Ministers, certain high ranking government officials and diplomatic couriers. This passport is in Maroon cover. This can be retained with the citizens even after service if she/he meets certain conditions. It is called “Type D”passport, acronym for Diplomatic

All Indian passports contain a note in Hindi and English from the “President of India”, addressing the authorities and territories of all countries:

“These are to request and require in the Name of the President of the Republic of India all those whom it may concern to allow the bearer to pass freely without let or hindrance, and to afford him or her, every assistance and protection of which he or she may stand in need.

By order of the President of the Republic of India”

This above note gives us the power and security in the foreign country where we are present from our Indian government. This is typically stamped and signed by “The president of India”

Ranking of Indian Passport and Index:

Even though Passport gives us the power to travel to foreign countries, Visa acts like the authority/permission from foreign countries to let us in to their countries. Until and unless you don’t have valid Visa, you cannot go to their country. But here’s the glitch, some passports have power such that even if you don’t have a Visa, you can travel to certain countries. Now this is based on respective countries Passport Index or Ranking value.

Passport ranking is a ranking based on their mobility score. The higher the mobility score, the better the Passport Power Rank. These are given by “The Henley Passport index”. This ranking is calculated by using the data from “International Air Transport Association”.

The ranking is based on the number of destination countries their citizens can visit without a prior visa.

Now this is determined by the countries policies. They will sign a treaty with the countries and allow their citizens without prior visa. The destination country should have a very good treaty to allow us without Visa.

Visa on arrival is a type where we can travel to those countries without visa but once you land there then you need to go to Embassy and get the Visa by paying money. This is a simpler process when compared to pre-visa approval.

Out of 199 countries, we only have Visa free destinations to 58, which means India doesn’t have a good treaty with those countries. Also those countries don’t believe our country and our ability to help their nation.

Passport Index is a directly proportional to our country’s economy and status. If we don’t have good treaty with those countries then we need to change our reforms and make our country powerful. As a developing nation, its a must for us.

Japan’s passport is ranked 1st among all the countries. Japanese people have Visa free access to almost 141 countries and visa on arrival to 21 and e-visa to 33 countries.

India as country has to develop a lot in its Foreign treaties because that would let us develop and maintain healthy relation with Other nations.

2 thoughts on “Power of Indian Passport and Ranking”